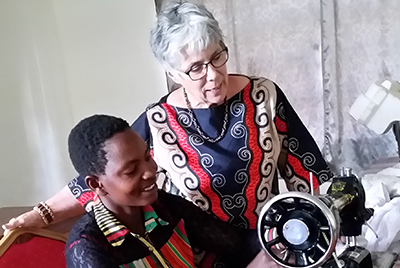 Joanne first heard the WISE story in 2010 and made her first trip to Kaoma in 2013. Her involvement, meant to be for that year alone, led to a lifelong commitment to WISE. She visits Kaoma every year, and has led several small groups from the US to the project. By taking them to the remote communities form which we draw our scholarship recipients, she believes they can better understand the challenges that these young people face as they pursue their educations.

Joanne–or JoJo, as she prefers to be known–accepted the role of President of the Board at the annual meeting in September, 2018 and continues as Chair of the Advisory Board.

She has experienced the gratitude of recipients of WISE’s support as it moves women and young people toward self-sustaining lives, and is especially impressed by the students’ desire to “pay it forward.”

Joanne presents the WISE story for schools, churches, and civic groups, and on the radio and the mid-west. In addition, she tours the US occasionally, creating friends for WISE through presentations and fundraisers.

Joanne enjoyed a career as a singer, music educator, and choral director, with a degree in music from Indiana University. She is an officer in AAUW (American Association of University Women) and as a board member of the Pine Mountain Music Festival. She has two grown children who live in Maine and is known as “Kuku JoJo” to her many “grandchildren” in Kaoma.